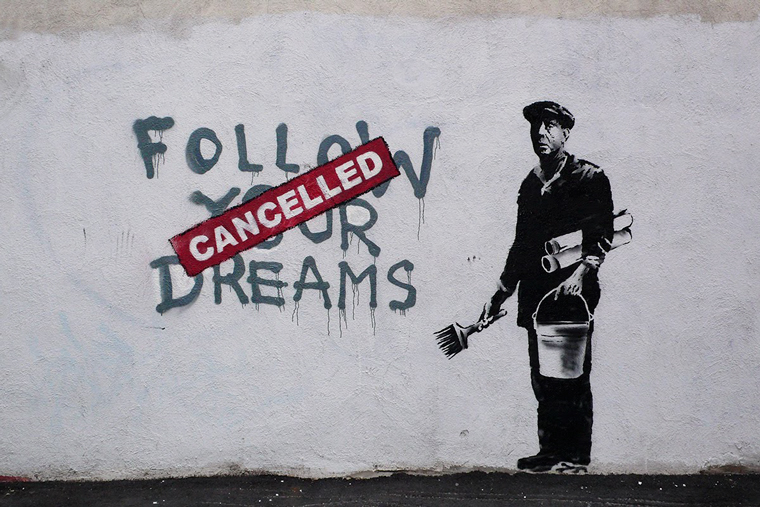 My Kindle clippings are a huge great mess of things: information I want to keep, scraps of prose that make me weep, and words I’ve learnt and fast forgotten. Among my clippings is a quote I added long ago that reads: “when you want something, all the universe conspires in helping you to achieve it.”

You may recognise it as a line from Paulo Coelho’s The Alchemist. I didn’t especially enjoy the book, but this line resonated with me. It offered a deep-reaching comfort; an assurance that if I wanted something badly enough and worked for it, then karma, serendipity or some mysterious alchemy would help me in securing it.

The quote fed into my belief that with enough hustle and graft, I could achieve anything. I believed in the concept of bootstrapping: the idea that you can lift yourself up the social and economic ladder through individual effort, hard work and personal responsibility,

I’m not alone in this. Entire nations are built on the bootstrap mentality. The American Dream is defined by it and it chimes too with the British psyche. If you’re scrappy and bullish, it says, if you roll up your sleeves and get on with it, if you keep calm and carry on, then one day you too will succeed.

What I’ve come to realise is that bootstrapping is a myth. You cannot pull yourself up by the bootstraps literally or metaphorically. We all need help and that’s something not enough of us admit. Every successful person I know has a secret crutch – sometimes acknowledged, often not.

Even when a crutch isn’t really secret (e.g. a well-connected partner or well-to-do father), people often don’t like to admit it. Just this week, journalist Laura McInerney  tweeted this.

Journalism is, oddly, one of the few professions I think *is* genuinely & easily open to all competent individuals. Blogging & YouTubing are free. If you’re brilliant, it’s v likely you’ll get picked up, & there’s no qualification barrier to entry (unlike, say, law or medicine).

McInerney made no mention of her PPE Oxford degree. When a reader mentioned it, she said “Nope. My degree had nothing to do with it,” attributing her success instead to blogging.

I wonder if she’s read PPE: the Oxford degree that runs Britain in The Guardian.

McInerney isn’t alone of course. People in elite fields all over Britain refuse to acknowledge their privilege – but it’s not inherited privilege that interests me most deeply. Rather, it’s the people from marginalised communities who have joined the elite. I call them chimeras, a single entity made of two very different things. The chimeras among us are often used as successful examples of bootstrapping. Sometimes, they take that mantle themselves urging others that “if I can do it, you can do it too”.

What we often don’t see is that they too had help. Perhaps their crutch isn’t as overt as an Oxford PPE, but instead a personal introduction, some little-known advice or insider tip.

I’ll elaborate. I could give you my highlight reel and tell you that I run my own business, that I travel and write for a living, that I own a London property seconds from the central line, that I’m buying a mortgage-free home in the Yorkshire Dales and have a pied-à-terre in France.

But I want to unpick this.

I lived at home with my parents for three years after graduation because women in my community are discouraged from living alone. This wasn’t my first choice, but it did allow me to save a deposit which helped me buy my London flat. Separately, my boyfriend received a five-figure loan from his parents to buy his own London flat. Because of this, we have been able to remortgage both our homes to fund our country house. Oh, and the pied-à-terre in France? It belongs to my boyfriend’s father and the subsidised rent we paid him for months allowed us the runway to grow our business.

I could speak at schools and conferences and tell young adults that if I can do it, you can do it too, but the truth is that I benefited from a unique set of circumstances that are not easily replicable. To tell others to bootstrap the way I did would be thoroughly disingenuous.

I’m not alone either. Dozens of successful POC I know personally have benefited from a secret crutch. Years ago, I commented to a friend that a mutual acquaintance with his popular column and speaking gig was doing really well. She smiled and said, “Yes, but he still lives with his parents”.

The same goes for a stylist friend who has a banker boyfriend, and the writer friend whose parents bought him a mortgage-free house in Zone 2 London, and the diversity champion who proudly sports an erudite degree but never mentions her parents’ PhDs.

These examples go on and on. I would like to see more open discussion about our secret crutches, especially in the age of social media where we bombard each other with messages of our success. I believe it would benefit our collective wellbeing if more of us spoke about the help behind the highlights.

We need more chimeras to speak openly like journalist Sathnam Sanghera who said recently in a podcast that he landed a job at the Financial Times because a fellow Cambridge grad briefed him on the questions, or like Cosmopolitan editor Farrah Storr who said on Twitter that she benefited from heavily subsidised accommodation at her sister’s flat.

Acknowledging our secret crutches would help demystify success. It would identify specific things that helped chimeras get ahead, but that are not widely available to their marginalised peers, thereby illustrating why it’s so incredibly hard to pull yourself up by your bootstraps.

The truth is that just because they did it, it doesn’t mean that you can too.