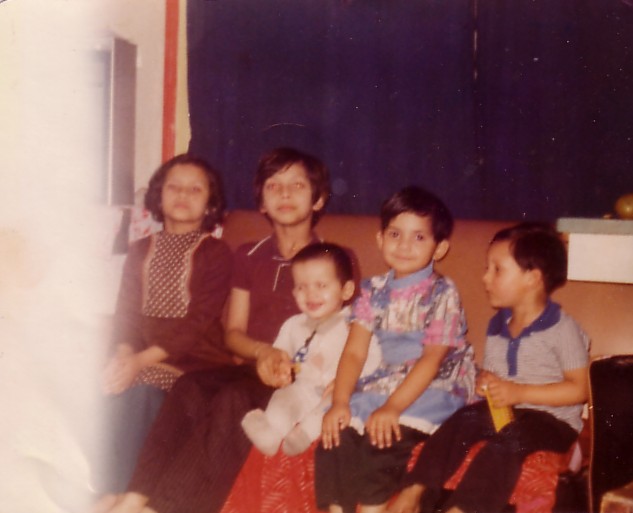 I am one of eight siblings – a fact I often use to explain away a range of flaws. For example, I don’t like sharing food. “Shall we get one of each and share?” is anathema to me. Tapas and mezes are tasty but after a childhood of splitting things into eight tiny portions, I will always prefer my own plate of food. I’m also deeply competitive and over-organised, two byproducts of a loud and lively home in which attention and structure were scarce.

Aside from my flaws, I also use my siblings as a shorthand for describing where I came from in terms of class. For better or worse, people make assumptions about large families (often poor, often disadvantaged). In my case those assumptions are true and saying that I have seven siblings seems an easier way to explain this than talking about period poverty for example.

What I say less often is that it is a privilege to have a big family. There has certainly been excessive drama, but also joyous laughter and deep unswerving support.

Each of us has had a role. When I sliced open my finger at the age of seven or eight, I knew to appeal to Jusna who is calm and practical. She cleaned and dried the wound with a cool efficiency that even now I find impressive.

Reena is the soft one; the one I asked for a treat from the Percy Ingle on Chrisp Street. I knew that when she said “we’ll see”, what she meant was “yes”.

Shiri is the cultured one. She taught me to close my menu to signal to a waiter I was ready to order. She taught me what it meant when people said “when in Rome”. She also taught me that writing stories was a thing – one I could possibly do.

My younger sisters are equally different. Forida is gentle and agreeable. Shafia is sharp and often acerbic. My brothers I am less close to, but it’s good to know that the eldest, Jamal, is there when he is needed.

Between them, my seven siblings have 21 children and when we get together in my childhood home, it is loud, raucous, fun, intense and silly. There is bustle in every corner and an ever-changing arrangement of seating given that there’s never enough. If you leave your seat, it will be commandeered as soon as you stand. There are constant chores to be done (teacups to wash, spills to mop, supplies to top up at the local shop). Getting someone to make a round of tea involves a delicate balance of push and pull given the amount of labour involved (anything between seven and ~20 cups).

I’ve had stretches of time without family. In 2014, I embarked on a year-long trip around the world and didn’t see my siblings. Later, I lived in France for a year on and off and didn’t seem them for months at a time. These stretches weren’t difficult, mainly because I knew I’d always return to London.

In September 2018, Peter and I moved to Richmond in North Yorkshire and this has felt entirely different mainly because of its permanence (a five-year test we agreed when we moved). As with many things, it has been six of one and half a dozen of the other. I have a better quality of life here. I love the natural beauty, the easy access to the Dales and the fact that people are nicer here – but I miss my friends and family.

Scenes we’ve shot in Richmond and the Dales

I’m part of a ‘Sisterhood’ WhatsApp group and it’s not uncommon to find messages in the triple figures if I don’t look at my phone for a couple of hours, but this is no apt substitute. On my last visit to see family, I did an unusual thing where I recorded a clip of us laughing and it makes me smile to listen to it.

When my sisters get together without me, naturally I get a sense of FOMO, but more than that, I miss the shades and moods of time spent with family. Life in Richmond is peaceful, but it seems to be in a single pitch and often playing the same tune.

It’s a cliché: urbanites moving to the country, getting bored and moving back. For me, it’s not boredom per se – I have enough deadlines to keep me busy and we’re on the road regularly for Atlas & Boots – but rather a sense of loss. I’ve lost the colour and chaos of my large and raucous family.

And so I feel caught in a strange in-between. Only in leaving London did I realise how stressful it is. I’m exhausted by the noise, pollution and crowds, and balk at the thought of returning. Equally, I feel somewhat sequestered in this most beautiful of counties.

Will I trade one life for another? In Richmond, my sense of wellbeing is consistently high with frequent peaks and very few troughs. In London, my joys are greater but can feel like mere interludes to long stretches of stress. Am I willing to trade the former for the latter? The answer is not yet. Not yet but ask me again after our five-year test.